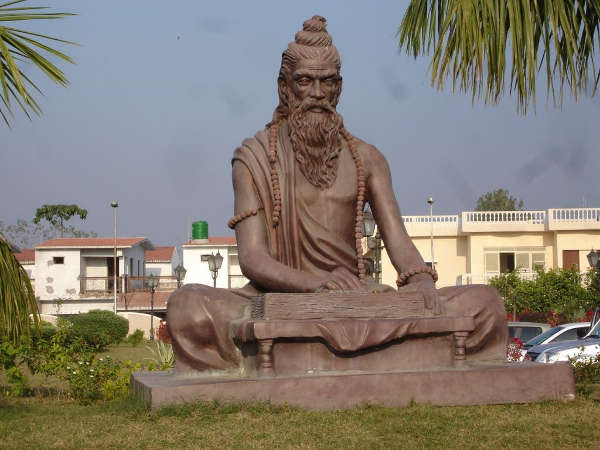 Patanjali is sometimes described as the father of yoga. He may have been one person or a succession of yogis as the yoga sutras, the yoga text attributed to him, is estimated to range from 5,000bce to 300ace.

The sutras are written in Sanskrit, an ancient Indian language which is still spoken in the north east of India today. Sanskrit is related to the Celtic languages e.g. Welsh as it shares the common root of the Indo-European language spoken by those Eurasians who migrated east and west taking their language and traditions with them.

I first came across the sutras (meaning threads) when studying for my yoga diploma with the British wheel. I rediscovered them some years later when learning to chant them with Ranju Roy. Chanting the sutras in Sanskrit, adds another level of experience to the sutras as the ancient roots of the language feel so familiar to me. Once learned, they seem to stay with you like a favourite melody and chanting them can have the same benefit as singing in promoting the feel good factor.

Yoga is a much more ancient practice than Buddhism and the Buddha is said to have practiced some pretty strong yoga practices on his way to enlightenment. As Buddhism became popular, it is said that yoga became less so, and the sutras are sometimes described as quite Buddhist in flavour, showing the yogic equivalent as it were.

Patanjali is known for his eight fold path of which physical or hatha yoga is one eighth. The first 2 stages are the yama and niyamas, retraints and observances and the first one of these is ahimsa which means non violence.

Many people come to yoga with the impression that it is a physical exercise and indeed it is. After a while of practicing, though, increasing awareness of the body, energy, mind and consciousness, means that our diet becomes a factor. In yoga, we try to achieve a state of satva. This means a light kind of energy which helps us with our practice. We wouldn’t eat a heavy meal prior to doing our yoga practice and meat and dairy products would be described as tamasic and rajasic foods which promote heaviness, sluggishness and the wrong sort of energy for our calming practice.

Dairy products are in fact part of the rajasic list which can be beneficial to us in limited quantities, but these recommendations were made well before factory farming.

At the end of the day, our yoga practice is our own personal journey to promote better health and relationship, both with ourselves and with others. Non judgement is always important.

I am sure that with our varied approach at Planetwise, there is something for everyone to experience and enjoy.

We use cookies to ensure that we give you the best experience on our website. If you continue to use this site we will assume that you are happy with it.OkRead more